Published on May 18, 2017 Categories: Featured News 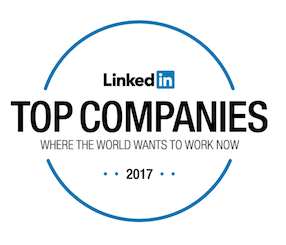 Our annual 2017 LinkedIn Top Companies list highlights the companies in top markets around the globe that are most sought-after by professionals, based on exclusive LinkedIn data and billions of actions by LinkedIn’s 500-plus million members.

In the U.S., 50 companies are spotlighted. While every company on the U.S. list fosters a unique culture, business model and executive suite, the list revealed a few stand-out insights:

Here's what the highest ranked LinkedIn Top Companies in the U.S. are doing to attract and keep top talent:

This year, the list includes rankings for the United States, United Kingdom, France, Germany, Australia, Brazil and India. Driven by the LinkedIn Editorial Team, which operates independently within LinkedIn, the list excludes LinkedIn and Microsoft from consideration as is standard for all editorial efforts. Like all content in the LinkedIn List series, the Top Companies list was developed by analyzing billions of actions taken by LinkedIn’s 500-plus million members to come up with a blended score derived from a combination of LinkedIn data and editorial that is used to rank the winners in each geography.

The Top Companies list is a part of the LinkedIn List franchise, which celebrates companies and individuals making an impact in the professional world, and it spotlights the companies that attract and retain top talent globally. The list is fueled by a combination of exclusive LinkedIn data including reach, engagement, job interest, retention and an editorial lens. It’s based on the actions of job seekers and professionals with editorial oversight, highlighting the companies most sought-after today. (You can read more about our full methodology here.)